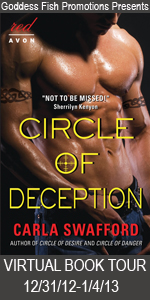 After disappearing days before her wedding to fellow Circle agent Rex Drago, Abby Rodriguez discovered that trying to reclaim a life—and a love—lost is a whole lot harder than she thought. When her family's safety is threatened by an arms dealer, Abby must go undercover with the one man who sees right through her as they play the scariest roles yet: husband and wife.

Mission or no mission, Rex Drago wants answers from his ex-fiancee. Forced to play along as a rival arms dealer and the husband he once wanted to be, Rex is finding it hard to stay professional—especially since Abby is just as hot as ever. And when they find themselves in a very intimate position, Abby and Rex must act the part—or risk blowing their cover entirely. 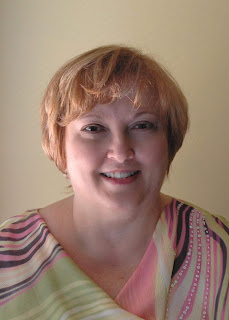 Thank you for inviting me here today. I love talking about books. As you can imagine, it makes my day when someone asks about my books, and that’s why I love going on blog tours. When else can I talk and talk about my books without feeling guilty for taking over a conversation?  LOL!
So let’s start with your question. How do I keep “the characters fresh and alluring to the readers” in my series?
Well, let’s see. I basically write each story centered on a couple with a lot of personal baggage and then treat the book like a standalone. Who doesn’t love to have at least one character with a backstory that breaks your heart? That’s why you keep rooting for the individual even when he or she acts like a donkey’s rear-end. 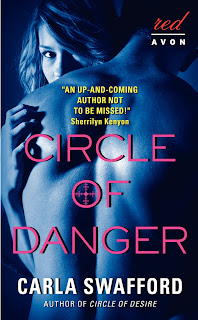 For example, in CIRCLE OF DESIRE, it opens with Olivia waiting with a sniper rifle to kill a man. Then we actually see her go through with it. In CIRCLE OF DANGER, Ryker wakes up to the news that the woman he cares about has been captured during an assignment. We see how he handles the bad news. Two different openings that play a part in developing the overtone of each book along with the characters’ issues. Olivia the cold-blooded assassin who learns how to love and the deeply scarred Ryker who gradually realizes he’s worth loving.
For the beginning of my newest book, CIRCLE OF DECEPTION, the heroine is sitting on a warehouse floor, making fun of the hero as he hangs naked by his ankles from the ceiling. They’re comfortable teasing each other, even during a dangerous situation, because of their past relationship, but you will quickly feel a layer of resentment toward each other. Different again from the other two as it is the only opening scene of the series where the heroine and hero are together.
The point I’m making is that from the characters’ different backstories, foibles and needs, the books become their own unique story. Then I just have to make sure the plot itself is diverse with highs and lows in different spots, and that’s easy with the personalities involved. 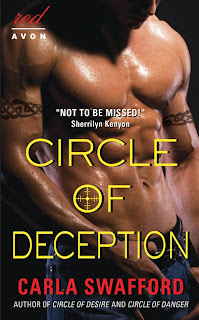 Of course, I love action suspense movies and hopefully a lot of that comes through in my books. I like to say that my stories are a good mix of La Femme Nikita and James Bond. Sexy, violent, hot, irreverent and fast paced.
I’m curious. Since there are several types of romantic suspense stories out there, what is your favorite?
Mimmi: Ooh, I'm a Romantic Suspense junkie!  But I admit, the creepier, the more I seem to like them, lol.  I'm very much a mood reader so it's what I'm feeling at the time ~ sometimes it's action packed, sometimes it's violence & gore, and sometimes it's where the hero just rushes in and save all!!
And WOW, I have to tell you not only how amazing all these book sound, but the COVERS!  The Cover Gods have truly smiled on you!! 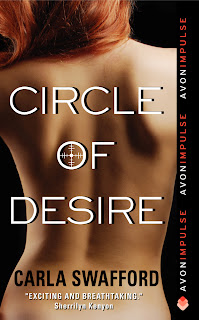 Thanks so much for being with us today, Sara!
It was a pleasure!  And you guys are in for a TREAT!
Carla will be awarding copies of the first 2 books in the series, choice of eBook or print (Print-USA Only) to a randomly drawn commenter during the tour.
Additionally, Carla will award the winner’s choice of a $10 Amazon or BN GC to one commenter at every stop! 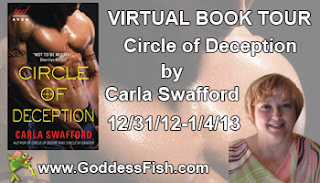 My Review ~~
So, this is book 3 in a series ~ so I'm going to admit first I was a little lost.  But Intrigued!  LOVE the hero, Rex ~ OMG, hawtie alert!  But seems there is a whole past issue of two factors of, for lack of a better explanation, an Agency ~ The Circle, and The Onyx Scepter, or OS ~ apparently in earlier books they'd split and actually fought against one another.
Having been tricked Rex & Abby both believe the other is dead ~ and gave their all to what they thought was the good fight for their 'side'.  Now, The Circle is complete again, and Rex & Abby know it was all a set up...but there are bad feelings, HURT feelings ~ they'd both believed the other to be dead and had sought solace elsewhere.  They'd actually fought against one another.  Abby had actually become close w/ Rex's brother, Jack, who is also a high ranking member of The Circle.
Now all the players are coming together to face one another to stop an nasty new weapon ~ a bullet that works like a heat seeking missle.  Abby & Rex will have to pose as a married couple to infiltrate the producer of the weapon, and they are both working so hard to overcome the feelings & lust they have for one another it's a constant battle.
At first, I wasn't sure ~ there were SO many characters!  But I actually REALLY liked this ~ enough I just bought the other 2 in the series (which, I might add, are on SALE at Amazon, Bk 1 for $1.99 and Bk 2 for $3.79) ~ I'm dying to know the back stories on these characters!  The dialogue & interaction between the team members & Abby & Rex alone is worth the read ~ and WAIT 'til you get to the sex scenes!!  Abby & Rex smolder and BURN up the pages, guys ~ WHOA on the smexy scenes.  And the arms dealer is up to no good & trying to get a little voyurism going on...well, you just have to READ it!
: > )     I can see why they labeled this baby RED!
Posted by Musings by Mimmi at 1:12 AM