Midnight's Seduction by Donna Grant ~ And an Audio bk GIVEAWAY!!

Book 3 in the Dark Warriors Series
SEDUCED BY PASSION
Captivating and enticing, Saffron Fletcher is a rarity in the Druid world—a Seer. She is the ultimate prize in an epic battle. After suffering horrendously at the hands of evil, her thirst for justice is all that keeps her going. Can she put her trust in the sinfully gorgeous, wonderfully dangerous Warrior who haunts her dreams and promises retribution for their common enemy?

ENSLAVED BY DESIRE
Camdyn MacKenna is hungry for revenge…until he falls prey to Saffron’s seductive magic. She enchants him like no other. But if Camdyn yields to her allure, will he be strong enough to defeat their sworn enemy—and resist the rising forces of evil that could destroy their love forever?
Midnight's Seduction will be out in Mass Market Paperback TODAY!!
http://www.amazon.com/gp/product/0312552505?ie=UTF8&tag=donnagranthis-20&linkCode=xm2&creativeASIN=0312552505
http://www.barnesandnoble.com/w/midnights-seduction-donna-grant/1108361467?ean=9780312552503
Here's a Snippet from Donna's FB page ~~
Saffron’s head whipped around as she heard a dangerous growl near her and realized it was Camdyn. She’d wondered what he looked like with his god u

nbound, and all her imaginings hadn’t prepared her for the amazing and fearsome and impressive sight of him.

She wasn’t afraid for herself. She knew none of the Warriors there would harm her, yet even getting a glimpse of Broc before hadn’t prepared her for what the sight of Camdyn in Warrior form would do to her.

Her heart raced, her blood pumped loudly in her ears. There was power within him, power and domination. Authority no one would dare take from him.

Supremacy no one could deny.

And it thrilled her that she was a part of it all, a part of something to do with Camdyn.

She gasped when he leapt away from her atop a diminutive yellow creature that let out a shriek, which had her covering her ears. Soon all the Warriors were fighting the wyrran in a battle full of roars, growls, and pure dominance by the Warriors.

Saffron didn’t think the clouds would ever move from over the moon, and when it did, it gave them the briefest of moments to see where their path lay.

Upon the Comet Stone, lit only by the light of the moon, was a double spiral which looked like an “S” laying on its side. Saffron watched the double spiral grow brighter and brighter.

“That’s where we need to be,” Reaghan said. “The Comet Stone. The doorway is there.”

Saffron started to follow the others as they ran to the Comet Stone, but she looked back to find Camdyn fighting five wyrran. His shirt was cut in five long rows across his chest, and she was sure that was blood as well.

“Aren’t you going to help him?” she asked Ian.

Sure enough, by the time she looked back at him, Camdyn had killed all five.

“What are you waiting on, woman?” Camdyn demanded as he ran towards her and took her arm to pull her after him.

They flew over the ground so quickly her feet barely touched earth. Exhilaration filled Saffron as they raced toward the Comet Stone. Until she skidded to a halt and saw where Reaghan had placed her hand over the double spiral and the earth suddenly gave way, opening a large section before the stone.

The others soon disappeared into the earth. Into the dark.

The very thing she feared more than anything.

I'm giving away a copy of
Midnight's Master
by Donna Grant
In AUDIO! 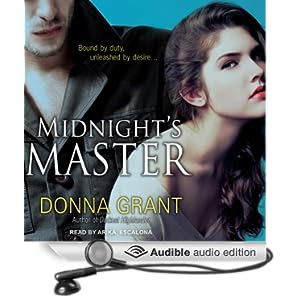 Just Tell me in the Comments if you've every read Donna ~
And if you have, what's been your favorite so far?

Don't forget to leave your email in your comment!!
Posted by Musings by Mimmi at 5:00 AM